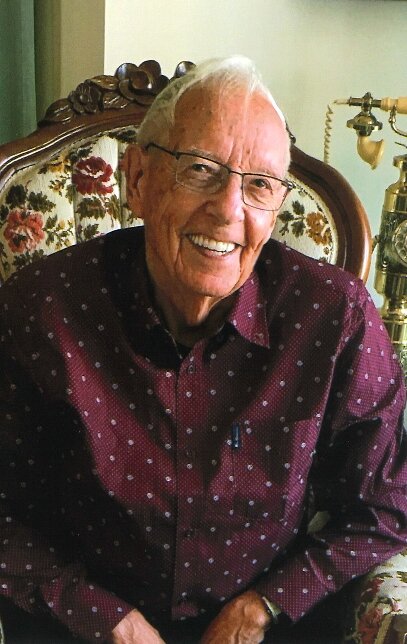 Please share a memory of Melvin to include in a keepsake book for family and friends.
View Tribute Book

Melvin Stromberg passed away at the Stettler Hospital at the age of 91 years.

He was born in Daysland and was the chosen son of Joel and Emma Stromberg.  Mel spent his childhood on the farm and attended school in nearby New Norway.

Following the completion of High School, he moved to Edmonton and attended the University of Alberta to pursue his dream of becoming a teacher.  His first year of teaching was at Bashaw School.  It was there that he met Lora Stadel who would become his wife.

Mel and Lora were married June 30, 1960 at Zion Lutheran Church in Bashaw.  In August of 1960 they moved to Stettler where Mel attained the position of Vice Principal at the Waverly School, later to become Principal.  He taught there from 1960-1989.  They were proud parents of son, Bradley and daughter, Jerryl.

He enjoyed his years of teaching, retiring in 1989.  As a sideline he arranged many trips for students and parents to Disneyland.  He was an active member of St. Peter Lutheran Church, the local Lions Club and the Good Sam Trailer Club, supporting many community events.  Mel was the first manager of Paragon Place.

Mel and Lora were social and fun loving people…the ultimate host and hostess.  Their home was a regular stopping point for friends and was the scene of many “serious” card games and special gatherings of all kinds.

He had many hobbies to enjoy in retirement – stamp collecting, collections of antique dishes and furniture, and creating “paper tole” pictures.  His very favorite moments were spent in his flower gardens.  Mel was not one to stay still very long. The family enjoyed many years of travelling and camping.

Mel was predeceased by his parents, infant twin brother and the following brothers and sisters-in-law:  Ben and Elsie Stadel, Ed and Philyce Stadel, Helena and Stan Bloomquist, Meta and Walter Freitag, Ewald Stadel, Ruth Schneider and several nieces and nephews.

He is survived by his wife, Lora; son Bradley; daughter Jerryl (Dave Johnston); Herman and Jane Stadel, Ed Schneider; numerous nieces and nephews and many great friends and colleagues.

Memorial Donations may be made to St. Peter Lutheran Church Mission and Service Fund, Stettler Health Care Foundation ~ Palliative Care or to a charity of choice.

Share Your Memory of
Melvin
Upload Your Memory View All Memories
Be the first to upload a memory!
Share A Memory