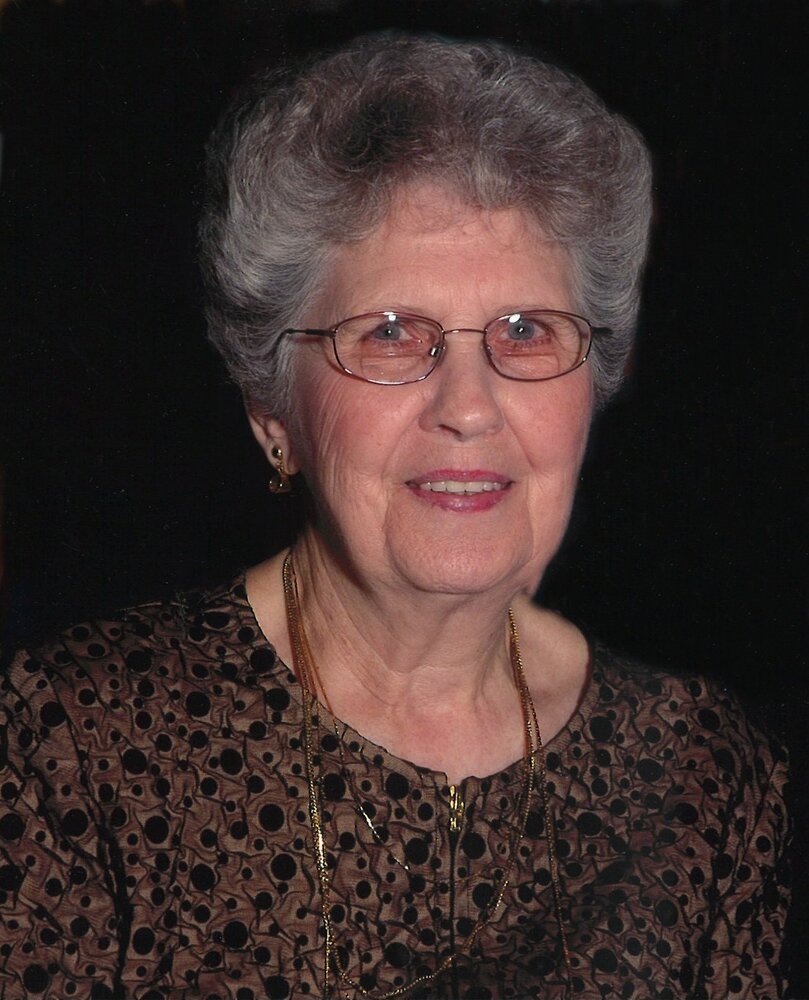 Please share a memory of Lois to include in a keepsake book for family and friends.
View Tribute Book

Lois was born at Halkirk, Alberta on February 4th, 1928 on the family farm.  I was the fourth child of Clarence and Kathleen Houser.  I had 3 brothers and 3 sisters.

After finishing school, I went to Toronto and trained as a beautician, and worked there for three years.  I returned to Castor to attend my sister Irene’s wedding and, also to help on the farm for a few months before going into partnership with Mrs. Percy Webber at the Castor Ladies Wear.

In 1952, I married Albert Blauel and moved my Beauty Parlour to our home which we built together with very little outside help.  Albert dug our basement by hand with a spade.  I continued to work until 1954, when our first son Calvin Clarence was born.  In 1956, our second son Kimley Ellis joined the family.  Lots of joy was brought into the home with these two little fellows.

After both boys were in school, I returned to work at the Ladies Wear again and later moved across the street to work for the Bain Brothers in their Drug Store.  In 1966, our third son was born, Mitchell Kenneth.  I remained at home to care for him until Albert took ill in 1969, so I went back to work at the Drug Store to support the family as Albert was no longer able to work and he passed away in November of 1969.

Mitchell had just turned 3 years of age, but with the help of Calvin and Kim looking after him plus his babysitter, Betty Harris, I continued to work at the Drug Store, as well as being a mother and father to the boys.  After Calvin graduated from high school in 1972, the boys and I moved to Calgary, returning to Castor after one year.

At that time, I took an office job at the Hospital.

In 1975, I married Boswell Belcher and moved to Saskatchewan.  That was only for a short time as Boswell became ill with a fast-growing cancer and passed away in 1977.

That same year Mitchell and I moved back to Castor and I returned to work at the Drug Store.  At this time Mike Bain Jr. owned the store.

After another 10 years at the store, I retired and moved to Red Deer.

In 1995, I married Chris Thumlert and we remained living in Red Deer until 2008 at which time we moved into the

Chris passed away in 2016 leaving me as a widow for the third time.

Lois moved into Extended Care in Castor in 2021 where she received wonderful care until her passing.

She is survived by her sons, Calvin (Wendy) Blauel of Stettler, Kim (Grace) Blauel of Calgary, and Mitch (Michele) Blauel of Red Deer;

three grandchildren Jennifer (Don) Blomquist of Lake Country BC and their daughters Mikayla and Brooklyn; Christopher (Aeisha) Blauel of East Saanichton, BC and Adrienne (Justin) Pilon of Calgary, AB;

Share Your Memory of
Lois
Upload Your Memory View All Memories
Be the first to upload a memory!
Share A Memory