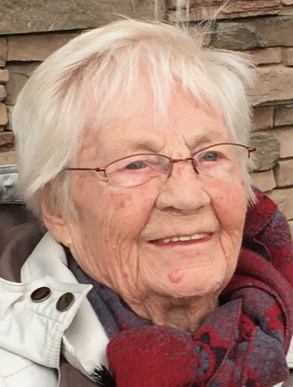 Please share a memory of Ria to include in a keepsake book for family and friends.
View Tribute Book

Maria Cornelia Wilhelmina (Burgmans) Verhoeven passed away peacefully on December 8th 2022 in Stettler, at the age of 94.  Ria was born in Udenhout the Netherlands on June 30 1928.  She married Jos Verhoeven, April 1954 and together they farmed first in Udenhout where they also started their family. Then moved to Dronten before immigrating to Alberta in 1980.  Mom and Dad worked hard to again have a successful farm and become part of their new community of Stettler.  Dad passed away in 2002 and left an empty spot for all but especially for Mom.  She continued to live on their acreage until eventually moving to a lodge in Red Deer and later to Points West Living in Stettler.  Mom enjoyed her winter holidays, visits with family and the board games with her grandkids.

Ria’s family invites you to join them for a time of sharing memories and honouring Ria’s life.

Donations in Ria’s memory are gratefully accepted to the Alberta Cancer Foundation.

Share Your Memory of
Ria
Upload Your Memory View All Memories
Be the first to upload a memory!
Share A Memory