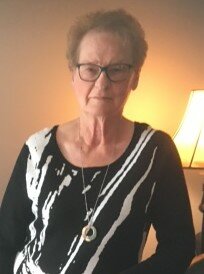 Please share a memory of Carol to include in a keepsake book for family and friends.
View Tribute Book

It is with great sadness that we announce the passing of Carol Streit at the age of 77 years. Carol was born March 25, 1945, in Red Deer, AB to Willard and Mae Hallett. She attended Wall Lake School south of Stettler and then into Waverly. After school she worked for her uncle looking after his girls and then worked at the Army and Navy in Edmonton for a short time until she met and married Thomas Streit on May 21, 1966. They welcomed 3 children to their family, Ronald Thomas in 1967, Lisa Mae in 1968 and Dean Alan in 1970. They lived on the Streit family dairy farm until 1980. Then moved north of there where they continued with a grain farming operation. Carol worked at the Alpha Creamery early on and then the Heart Haven Lodge until her retirement where she resumed farm life. She enjoyed her interactions with the seniors and fellow workers, making some long-time friends. Carol enjoyed curling in Botha and a good game of cards with family and friends. She is remembered as a hardworking woman, with a big heart, a flair for cooking and a green thumb, growing magnificent vegetable and flower gardens which, she shared with family, friends, neighbours and anybody that popped in. She loved farm/country life with a beautiful yard and enjoyed working with and feeding the cattle.

Share Your Memory of
Carol
Upload Your Memory View All Memories
Be the first to upload a memory!
Share A Memory