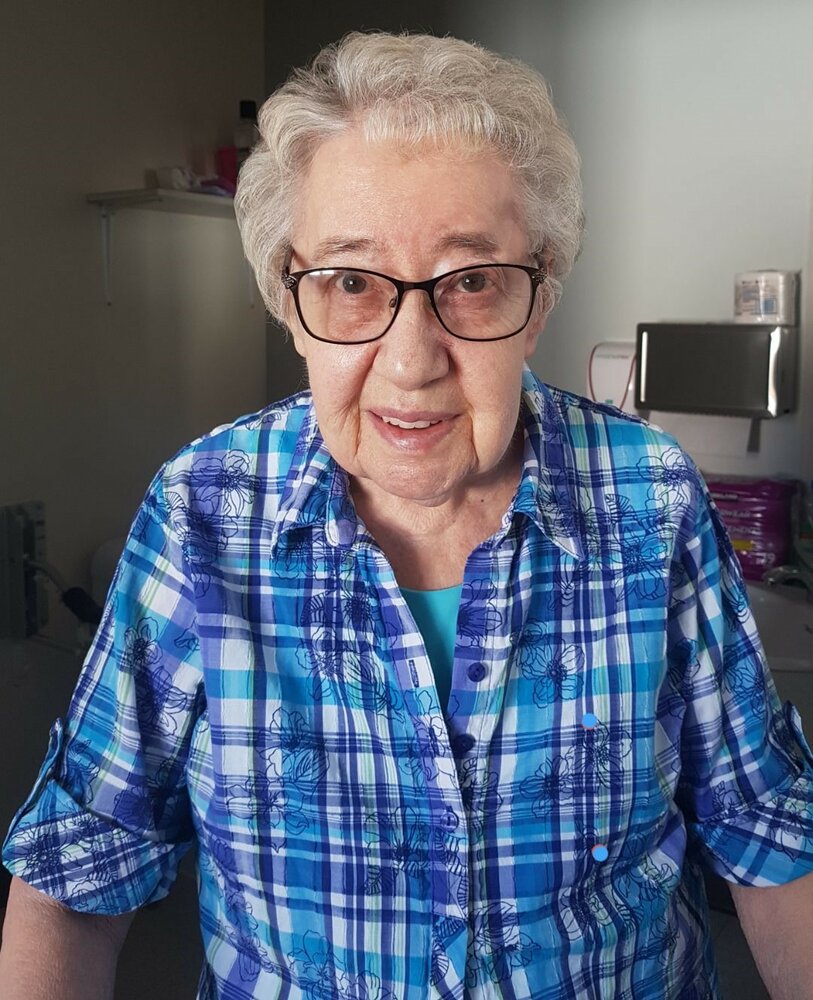 Anne Allen of Castor passed away peacefully at the Extended Care Facility in Viking, on October 19th, 2021 at the age of 83 years.

Anne was born to Jake & Ruby Quiring, in Coronation, AB on August 5th, 1938 and grew up in the Fleet/Coronation area.

After attending Henderson Business College in 1954 she worked for the Bank of Montreal in Castor. Anne married Eldon Phillips with whom she had 3 daughters.  Eldon passed away in 1976.

In later years Anne worked at the County of Castor office, Gus Wetter High School and Esso bulk station putting her business skills to good use.

Anne married Clarence Allen in 1978 and they spent many happy years together before Clarence passed away in 2015.

In her spare time Anne liked to knit and crochet, creating beautiful pieces of work for family and friends. She also liked to read, do crossword puzzles, garden and bake.  Oh yes, the baking! Kids, grandkids and great grandkids never had to wonder if Grandma Anne had any goodies because she always did!

Anne will be remembered for these things and her unwavering love and enjoyment of all the kids, in whom she took an enormous amount of pride.

A stroke suffered in 2017 affected Anne’s ability to properly communicate and she was moved to Viking in 2018 to be closer to family.

Even though her speech was hindered, and later her mobility, she still was able to enjoy family visits and loved getting cards, letters and photos in the mail from family and friends.

Special to her care was her granddaughter Bailey, who became Grandma’s most dedicated helper.  As Anne’s appearance was still very important to her, Bailey’s hair curling skills and wardrobe maintenance were dearly appreciated (as was her snack buying).  Grandma cherished and appreciated Baileys help beyond words, even if it meant a wind blown bumpy walk down the streets of Viking.

She also leaves behind her sister Peggy, a cherished group of cousins, nieces and nephews and the wonderful Allen clan.   Anne was predeceased by her parents Jake Quiring in 1974 and Ruby Stokes (Quiring) in 1995 and husband Clarence in 2015.

She will be missed.

Celebration of Life (By invitation only)

Memorial Donations may be made to

Share Your Memory of
Mary Anne
Upload Your Memory View All Memories
Be the first to upload a memory!
Share A Memory