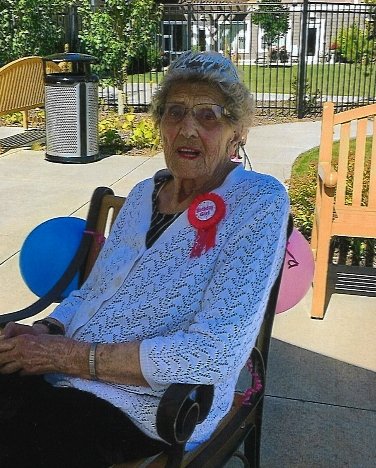 Marjorie Lillian Hosler was born in Neepawa, Manitoba August 16, 1920 to Claude and Lillian Tyler.  She completed grade 11 and taught Sunday School at the Saint James Anglican Church.  She later worked as a hardware store clerk until her marriage to Ivan Hosler on March 19, 1942.  They moved to Winnipeg where their children Karen and Douglas were born.

In 1948 they moved to Alberta living in Brooks, Bluffton, Clive, Stettler, Pincher Creek, Stettler (again), Red Deer and finally Blackfalds.  Marj operated the Boarding Kennels there until 1985 when Ivan passed away.  She also wrote a column in her later years for the Lacombe Globe newspaper.

Never one to sit around, at 65 she decided to take time for herself and do some travelling.  She visited Disneyland, Maritimes, Hawaii, Alaska, Arizona and took an ocean cruise with friends through the Panama Canal and US Virgin Islands.

She loved to garden and share her canning, pickling, jams and jellies as gifts of “care packages” with many.  In 1996 her carpet bowling team won a bronze medal at the Alberta Senior Summer Games.  Active in her church and community where she lived alone, planting her garden and cutting grass until 2005 at 85.  2009 saw significant change as Marj moved into a senior’s lodge in Lacombe, before moving back to Stettler at Points West Living in 2015, where she resided until her passing.

Donations can be made to the Kids Sport Society of Alberta, The Stettler Public Library, Stettler Animal Haven Rescue League or the charity of your choice.

Share Your Memory of
Marjorie
Upload Your Memory View All Memories
Be the first to upload a memory!