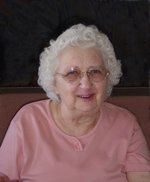 KEMPF – Margaret, long time resident of Botha, AB passed away on Thursday, December 9, 2010 at the age of 86 years. Margaret Kempf (Fischer) was born on October 15, 1924 in Newburgh, AB. She was the third child of five children born to William and Ida Fischer. She lived on the family farm southeast of Medicine Hat, and attended school as her parents could afford it. When she was old enough to work, she lived with her Grandparents in Medicine Hat and worked at a café as a waitress. She often told stories of their famous Lemon Meringue pie. She also spent time teaching at a small school in the area. She loved music and dancing and travelled with her brother to many dances. It was at one of these dances that she met Werner. She was married to Werner in Calgary on July 27, 1957. She then moved to the farm at Botha where she spent the rest of her life. Margaret and Werner had two children, Larry and Judy. While raising her family, she worked beside Werner, supporting him on the farm as a dedicated farmwife, and later for many years in the butcher house. She loved to garden and willingly shared with neighbors and friends when favorable weather provided bountiful harvests. She had a passion for cooking and baking, and from her kitchen came many delights including homemade buns, pies, cookies, preserves, and many family favorites that her whole family enjoyed. She was a quiet woman who didn’t like a lot of fanfare, but loved and appreciated the attention of her family, and visiting with friends and neighbors. She was proud of all the accomplishments of her children and grandchildren, and loved celebrating their achievements. She amazed us all as she overcame the death of her husband in 2005, underwent major surgery only weeks later, and eventually returned to her own home to live on the farm. She always found meaning in her life and she always had a goal. Her latest dream was to work in the greenhouse being built on the farm, which she so looked forward to seeing in operation. She will be greatly missed as she had a quiet strength that influenced all of us. Margaret passed away on December 9, at the Foothills Hospital in Calgary, at the age of 86. She was still positive and enthusiastic about the future. Her time with us is over but a new journey is just beginning. She leaves to mourn her son, Larry and wife Pat, and three grandchildren, Brent (Janine), Sarah (Deryk Jones), and Amy (Blaine McKay); daughter, Judy and husband Ron, and two grandchildren, Emily and Katie; one brother George Fischer and wife Freda; brother in law Art Kempf and wife Hilda, and a sister in law Bernice Kempf, as well as many nieces, nephews, other relatives, and friends and neighbors in the community. She was predeceased by her husband Werner, her parents, and a brother Albert, and two siblings that died in infancy. Funeral Services in Margaret’s memory were held in the Heartland Chapel of the Stettler Funeral Home on Wednesday, December 15, 2010 at 2:00 P.M. with Pastor Karl Faltin officiating. Evelyn Strandquist played for the congregational hymns. Pat Kempf gave a loving tribute in memory of her mother in law. The interment followed the funeral service in Lakeview Cemetery, Stettler, AB. The pallbearers were Brent Kempf, Shawn Hosler, Brian Hosler, Al Bibaud, Steve Davies, and Don Fischer. Following the interment family and friends gathered together in the fellowship hall of the Stettler Funeral Home for a time of sharing of memories and refreshments. Memorial contributions may be made in Margaret’s memory to the Foothills Critical Intensive Care Unit in care of the Stettler Funeral Home, Box 1780 Stettler, AB T0C 2L0. Stettler Funeral Home & Crematorium were entrusted with the care and funeral arrangements. For further information please call 403-742-3422.