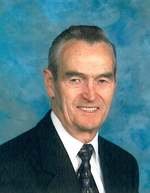 Robert Vincent North passed away at the Red Deer Regional Hospital on December 29th, 2010, at the age of 83 years. Bob was born February 25th, 1927 in Stettler, Alberta. He was the youngest of 3 children born to Frank and Eleanor North. He grew up on the family farm in the Erskine area. He worked in the oilfield and with the Stettler Gas Company for several years before returning to farm with his father. He married Jean Vanderford in 1954 and they had 5 children. He retired from active farming in 1979 but continued to be involved in the cattle business and real estate business for several years. Bob enjoyed baseball and curling, both as a capable player and as an avid spectator. He was an astute observer of world events and politics and did not hesitate to volunteer his opinion. He was active in provincial politics. His sense of humor was known and appreciated by all. His many stories provided countless hours of entertainment for his family and friends. He was known in the community for his honesty, integrity, and his willingness to always lend a hand. Bob is survived by his loving wife Jean; three daughters: Leslie (Reuben) Avila of Germantown, Tennessee, Karen (Rex) Nielsen of Edmonton, Sandy (Barry) Zimmerman of St. Albert; two sons Scott (Ina) of Jakarta, Indonesia and Frank (Susan) of St. Albert; seventeen grandchildren and two great-grandchildren. He is also survived by his sister-in-law Lois McPherson of Edmonton and his brother-in-law Elmer Turigan, several nieces, nephews and many good friends. Bob was predeceased by his parents, his brother Kenneth “John” North and his sister Amla Massey. Funeral services were held on Monday, January 3, 2011 at 2:00 PM at the Heartland Chapel of Stettler Funeral Home with Rev. Susan Bowyer officiating. Musicians LeeAnn Kinderwater and Joan Rushton played for the congregational hymns and for the solos “Spirit, Spirit of Gentleness” and “The Ones We Love” sung by LeeAnn Kinderwater. Son in law Rex Neilson gave the eulogy. The Erskine Oddfellows presented the fraternal rites for Bob North. Cremation has taken place and interment will take place in the spring. Friends and family gathered in the Heartland Reception Centre for a time of fellowship and a luncheon prepared and served by the Union Hall Ladies. Memorial donations may be made to the Alberta Heart & Stroke Foundation, Erskine Cemetery or a charity of choice. Stettler Funeral Home & Crematorium entrusted with the arrangements.