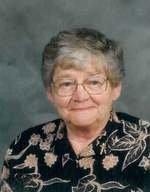 NEILL Grace Pauline (Clark) Grace was born on April 07, 1924 on her parent’s farm, north of Erskine, and passed away peacefully in Stettler Hospital on December 24, 2010, shortly after visits from some of her extended family. She is survived by her sister-in-law, Alberta Harrison and two cousins. Also remembering Grace fondly are 16 nephews and nieces, and many good friends from places in Canada and the United States. Grace worked hard on the family farm after her mother died in 1940, but enjoyed driving trips with her dad to Minnesota, the home state of her dad and some of her siblings. She and her dad moved into Stettler in 1945, where Grace kept house for him until 1949 when she married George. That led to a myriad of events, some with hardships and many with wonderful experiences. During the next fifty-nine years, Grace helped George on the farm, seeding and harvesting, tending cattle, pigs and chickens, and any thing else needed on the farm. There was an interlude where George worked in the oilfield and Grace worked in Stettler in a bakery. Two things were happy events on many occasions. They both enjoyed travelling in their truck camper and in later years on bus tours throughout North America. There other love was auctions sales. She also enjoyed her memberships in the Buffalo Lake Naturalists and the local Legion. The pair would often be found having coffee or lunch with friends, in the Legion or the downtown coffee shop. Another favorite thing Grace did was sing with a group of local singers. Grace was predeceased by her husband in 2008, her brother and six sisters during the last sixty years. More recently, seven nephews and her brother-in law passed away, leaving Grace saying she couldn't spare any more nephews. A celebration of Grace’s life will be held at St. Georges Anglican Church; on Monday, January 3rd, 2011 at 2:00 p.m. Donations in her memory may be made to St. Georges Anglican Church, Stettler, Stettler Health Services Foundation or a charity of your choice.

Share Your Memory of
Grace
Upload Your Memory View All Memories
Be the first to upload a memory!
Share A Memory