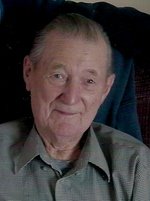 Lloyd Wesley Hart Passed away on December 15, 2010 in Stettler at the age of 93. Lloyd was born on March 4, 1917 to Charles and Alma Hart on a homestead two miles northeast of Botha, Alberta. Lloyd attended all his school years at the Botha Consolidated School and, after the usual trials of growing up on an early homestead in the 1930’s, he worked at various carpentry and construction jobs. In 1941 he enlisted in the Royal Canadian Air Force and served four years as a Wireless Air Gunner, including six months overseas. During this time he met and married the love of his life, Betty Harbison. After being discharged in 1945, Lloyd worked at carpentry and then bought a commercial truck business. In 1949 he and Betty began farming on his father’s original homestead, living in the house which was built in 1918. There they raised their family of one daughter and four sons. After 31 years of running a successful mixed farming operation, Lloyd and Betty moved into a new house in Botha in 1978 to enjoy their retirement. Over the years Lloyd has enjoyed curling, hunting, travel, golfing, coin collecting, painting, dancing and poetry with his family and friends. He was an ardent supporter of both the Edmonton Eskimos and Oilers, rooting them on to many championships. Lloyd was predeceased by his siblings Walt, Harold, Mabel, Ethel and Anna, an infant son David, and by his son-in law, Dennis Hinkle. He is survived by his loving wife Betty; daughter Vivian Hinkle and grandchildren Cheryl (Mike) Talma, Karen (Steve) Copeland and Laura Hinkle; son Allan (Jessie Inman) Hart and grandchildren Claire (Brent) Carr and Allan Hart Jr; son Jim Hart; son Ken (Sandra) Hart and grandchildren Julia (Dan Hikita) Hart and Angela (Garett) Martin; son Ted (Jana) Hart and grandchildren Chelsea, Eric, Sam, and Elyse Hart; along with 6 great grand children; all whom were loved very much. He will be missed by all. As an expression of sympathy donations may be made to Botha Woodland Cemetery, Botha United Church, or Stettler Health Services foundation – Pine Ridge.

Share Your Memory of
Lloyd
Upload Your Memory View All Memories
Be the first to upload a memory!
Share A Memory