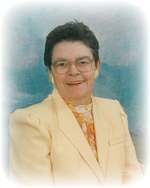 Cecille (Cec) Bresett (nee Heslop) passed away at her residence December 13, 2010. She was born in Castor, Alberta on March 12, 1927, the 10th child of 13 to Fred & Elcy Heslop. Cec grew up on the family farm and married George Bresett in 1945. They settled on a farm near Fleet where they raised their family. Together they celebrated almost 59 years of marriage before George’s passing in 2004. The family moved from the farm to Stettler in 1963 where George and Cec later undertook the huge task of building their own home. Despite heart problems from birth and only one healthy arm, she did all of the drywall mudding, taping, sanding and painting while working full time selling shoes and ladies wear at the Style Shoppe. After the Style Shoppe closed, she worked at Freda’s Yard Goods and the Singer store selling fabric, notions and patterns. With her friendly personality and demeanor, Cec enjoyed working in retail and developed many close friendships with colleagues and customers alike before retiring in 1987. Family was paramount in Cec’s life. Her children, grandchildren, great grandchildren, brothers and sisters, nieces and nephews enjoyed a special place in her heart. Growing up in a large family, she loved having lots of people around. Just the mention of a family reunion, and she was busy helping with the planning, cooking and whatever needed to be done. Cec enjoyed her garden, especially after retiring when she had more time to devote to it. She was well known for her green thumb. In addition to gardening, she and George enjoyed floor curling, playing cards and visiting with their many friends. Cec gave generously of her time for others – volunteering for Palliative Care and the Adult Literacy Program where she tutored students in English for over 10 years. With help from very dear friends and neighbours, she maintained the house and garden for several years after George’s passing, but with her health issues becoming greater, she moved to Heart Haven Lodge where she resided until her death. She especially enjoyed the social atmosphere, playing cards and bingo. She is survived by her children Bill Bresett of Swift Current, SK and Mary Anne Switzer (Yvon) of Calgary, AB; her grandchildren: Cindy Schmidt (Barry ) of Trochu, AB, Lisa McLeod (Jim) of Moose Jaw, SK and Michael Bresett (Shaylen) of Chestermere, AB; great grandchildren: Ryan & Sara McLeod of Moose Jaw, SK and Ryley & Desiree Schmidt of Trochu, AB; step grand & great grandchildren Kim Young (Kevin) and Jackson of Calgary, AB and Kacy (Aaron) Fritz , Wyatt & Madeleine of High River, AB. Cecille is also survived by sisters: Florence Sissons & Grace Allen, and brothers: Frank Heslop & Charles Heslop along with many other relatives and friends. Cec was predeceased by her husband George, parents Fred & Elcy Heslop, sisters: Elsie, Mary, Dorothy, Edna & Pauline and brothers: Bill, Ted & Don. The family would like to express special thanks to Cardiologists Dr. Wyse and Dr. Belenkie and the Cardiac Function Clinic Nurse Clinicians for their wonderful care and support, and the staff at Heart Haven for their kindness. If friends so desire, memorial tributes may be made directly to the Calgary Health Trust, Libin Cardiovascular Institute of Alberta, Health Sciences Centre, 3330 Hospital Drive NW, Calgary, AB T2N 4N1. Telephone: (403) 220-2052. Funeral services were held on Saturday, December 18, 2010 in the Heartland Chapel of Stettler Funeral Home, Stettler, Alberta with Pastor Rick Laurendeau officiating. Elaine Sissons read Psalm 23 and the poem Christmas In Heaven. Mrs. Evelyn Strandquist led the congregational hymns as organist. Following the funeral service, family and friends joined together in the Heartland Fellowship Hall for a time of sharing and a luncheon prepared and served by Pass The Pepper. Stettler Funeral Home & Crematorium were entrusted with the care and arrangements.

Share Your Memory of
Cecille
Upload Your Memory View All Memories
Be the first to upload a memory!
Share A Memory