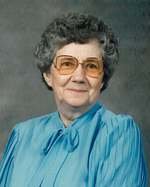 Obituary of May Falkenberg

Ethel May Falkenberg passed away peacefully at Heritage House Lodge on Saturday, November 20, 2010 at the age of 91. May was born in Verdant Valley, Alberta, near Drumheller on March 30, 1919. She was the only daughter born to Alexander and Anna Scott. May spent her growing up years on the farm in the Gadsby area. She married Melvin Falkenberg on July 26, 1942 and they resided in Stettler following WWII. Together they raised 5 children. Geraldine was born in 1944, Robert was born in 1946 and twins Doug and Don were born in 1947. This left May to look after 4 children under the age of 3 years. Later Beverly was born in 1955. Besides a busy home life, May found time to curl, bowl, be an active member in the local chapter of the I.O.D.E. and a member of the United Church Women’s group. May worked outside the home as well, spending time in the laundry, kitchen and house keeping departments at the Stettler Hospital. May was gifted with a “green thumb.” Her ability to get plants to show their best was amazing. Often there would be a huge fern on display in the living room of their home. Christmas Cactuses could be seen blooming for many months of the year. She would spend hours knitting sweaters for her children and later her grandchildren. May loved to play solitaire and would win very often. Her quiet, kind nature was often exemplified in the song of a yellow canary pet that was often seen in a cage somewhere in front of a window in the family home. May is survived by her daughters Geraldine (Norm) Dennis and Bev (Dale) Anderson; sons: Bob (Barb), Doug (Debra) and Don (Bev). She is also survived by her 13 grandchildren: Diana (Arie) Vandervelden, Sheila (Mike) Petrone, Amy (Stuart) Dennis-Bergan, Scott (Pam) Falkenberg, Kelly (Mark) Woods, Ryan Falkenberg, Andrew Falkenberg, Codey (Shannon) Falkenberg, Kyle Falkenberg, Becky (Mike) King, Jordan Falkenberg, Julie (Clint) Poffenroth and Shelly Anderson; ten great grandchildren and one sister in law Kay Scott. May was predeceased by her husband Melvin Falkenberg, her brothers Bill Scott and Harry Scott and her sister in law Allie Scott and by grandchildren Jeffery and Christine Dennis and Mark Anderson. Funeral services for the late May Falkenberg will be held at the Stettler United Church on Friday, November 26, 2010 at 2:00 PM with Reverend Debbie Stockdale officiating. As an expression of sympathy and in loving memory, memorial contributions may be made to the Stettler Health Services Foundation or the charity of your choice c/o Stettler Funeral Home & Crematorium, Box 1780, Stettler, Alberta T0C 2L0 who have been entrusted with the care and arrangements. Condolences may be sent to the family at www.stettlerfuneralhome.com

Share Your Memory of
May
Upload Your Memory View All Memories
Be the first to upload a memory!
Share A Memory