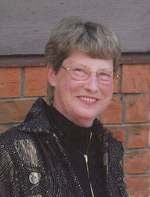 Margaret Rose Allen, known as Peggy passed away suddenly on November 14th, 2010 in the University of Alberta Hospital at the age of 66 years. She was born July 12th 1944 in Castor. She was the fifth child of six and the first daughter to Harold and Goldie Allen. She grew up on the farm south of Castor in the horse shoe area with her brothers Clarence, Merle, Jim, Don and younger sister Phyllis. Peggy attended school at Pollock School and helped out on the family farm. She moved in to Castor where she worked at the Castor Hotel, Joe Bain’s Furniture Store, and then Revelstoke Lumber Yard for over 25 years. She married her first husband Richard Wilkie on October 5th, 1962. They raised two children Janice and Jackie and she was very active playing baseball, gardening and working in the community. Richard passed away in 1981 in a tragic plane crash. She carried on running the family business E & R Electric. She married Richard Brown on July 26th, 1982. Peggy continued to live and work in Castor. Her passions were baseball, gardening, bird watching, traveling, and spending time with her children, grandchildren, great grandchildren, brothers, sisters, nieces, nephews, and many friends. Peggy was predeceased by her parents Goldie and Harold; first husband Richard Wilkie; and brother Merle Allen. Peggy is survived by her devoted husband Richard, loving daughter’s Janice (Warren) Dyck and Jackie Johnsguard, three wonderful grandchildren Gena (Victor) Forno, Gregory Dyck and Krista Johnsguard, two wonderful great grandchildren Madison and Clara, numerous very special nieces, nephews and many friends. Peggy was truly loved and admired by her entire family. Funeral services are being held at Castor Evangelical Missionary Church on Friday November 19, 2010, with Jim Culham and Grant Sickston officiating. Private family interment is being held in the Castor Cemetery with Gregory Dyck, Victor Forno, Reid Brown, Shane Klatt, Dwayne Allen, and Lorne Allen representing all of the grandchildren, nephews, nieces, and close friends serving as pallbearers. Following the service family and friends are invited to gather in the Castor Evangelical Missionary Church Fellowship Hall for a time of sharing and light refreshments prepared and served by the Castor Missionary Church Women. Memorial donations may be made to the Castor Hospital, the Crohn’s & Colitis Foundation of Canada or a charity of your own choosing, c/o Parkview Funeral Chapels & Crematorium, Box 186, Castor, AB T0C 0X0.