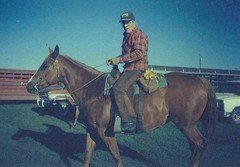 Francis Henry (Frank) Hadwin passed away peacefully on April 24, 2019 at the Consort Hospital & Care Centre at the age of 86 years. Frank was born January 26, 1933 in Consort Hospital to parents Henry and Anne Hadwin. He had one older brother John, 2 younger brothers Michael & Doug and one younger sister Margaret. They lived southeast of Consort in the Watson Coulee on the original Hadwin homestead. Frank married Elizabeth (Betty) Spencer on July 2, 1961 in Consort. They had 3 daughters: Janet Doyle (Dale Johnson) of Drayton Valley, Mary (Aaron) Ganser of Provost and Margaret Hadwin of Forestburg; 8 grandchildren: Shane (Jade) Por, Chris (Jodi) Por, Dallas Doyle (Chelsea Ray), Kaitlyn (Chance) McRobert, Justin Ganser (Jalena Bertagnolli), Christyn Hadwin, Alyssa Blondin and Jenna Hadwin; 8 great-grandchildren: Logan, Lucas, Cordelia, Rick, Naomi, Marcus, Lucy and Jace. Frank stopped going to school when he was 14 and went to work early, as many young men of his generation did. He worked various ranching jobs throughout his life, most notably Gould’s in Consort, Smyth Ranch at Loverna, Triam Ranch at Okotoks, Hadwin Bros. in Consort, The Imperial Ranch at Byemoor and lastly the Usher Ranch at Big Valley. He was never happier than when he could ride out on a horse, with a good dog by his side, and check the cows. He took an AI course and used his skills to help many fellow ranchers pregnancy test their cows. He was always available to lend a hand if a neighbor or family member needed it…all you had to do was ask. His love of nature and animals was evident in everything he did. Frank and Betty retired to an acreage south of Botha in 1996 and began raising emu. In 2003 they sold the last of the birds and moved to an acreage near Gadsby where Frank kept busy with his horse, dog, cats, garden, yard and workshop. In 2017, his health had declined, and he left his beloved acreage and moved to Consort Lodge for a short time and then Consort Hospital and Care Centre. Frank was predeceased by his wife Betty; parents Henry and Anne Hadwin; his brothers John and Michael; sister Margaret; cousin Percy and nephew Marc. Frank is survived by and will be sadly missed by all his children; his grandchildren; his brother Doug (Joan) Hadwin; in-laws: John (Rita) Spencer, George (Lori) Spencer, Robin (Phyl) Read, Bob (Lois) Specht, Jim (Marietta) Spencer; his special ‘Aunt’ Patsy (Joe) Sherritt; special friends Cam and Debbie McNabb; numerous nieces and nephews, as well as many other family and friends. A Celebration of Life will be held on Thursday, May 2, 2019 at 2:00 pm at the Consort Knox United Church with Rev. Ohwang Kawn officiating. Memorial donations may be made to S.T.A.R.S or to a charity of your choice. Condolences may be sent to the family at www.parkviewfuneralchapels.com Parkview Funeral Chapels & Crematorium entrusted with the care and funeral arrangements 403-578-3777.

Share Your Memory of
Francis
Upload Your Memory View All Memories
Be the first to upload a memory!
Share A Memory